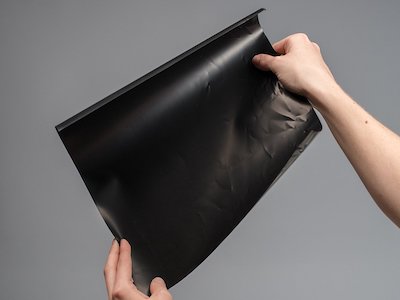 It's a conductive sheet that's sometimes used for packaging ESD-sensitive electronics, but is commonly used by wearables hobbyists since it changes resistance when anything happens to it. Wrinkling. Heating. Bending. Twisting. Pressing. Anything that touches it is detectable!

However, there's not a ton of information about it online, like how much change in resistance is visible for bending vs. twisting, etc. So I decide to do some testing and show y'all the results so you wouldn't have to!

All tests were done on a 6.0 x 1.2 cm piece of the material, which I got from Adafruit. I held it in contact using some alligator clips, which weren't super precise contacts. This is probably why the baseline resistances were so variable, around 55 kΩ ± 5 kΩ. 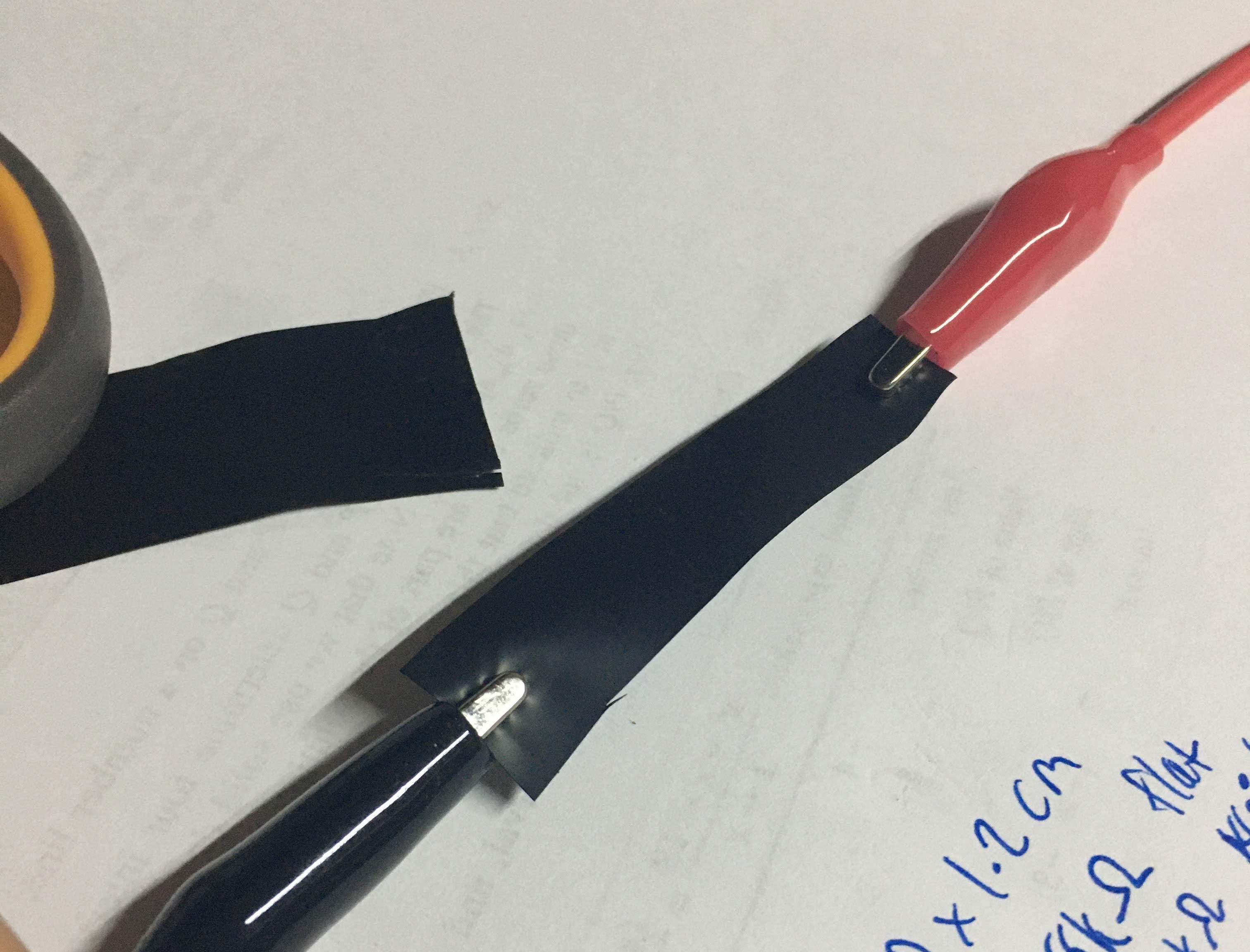 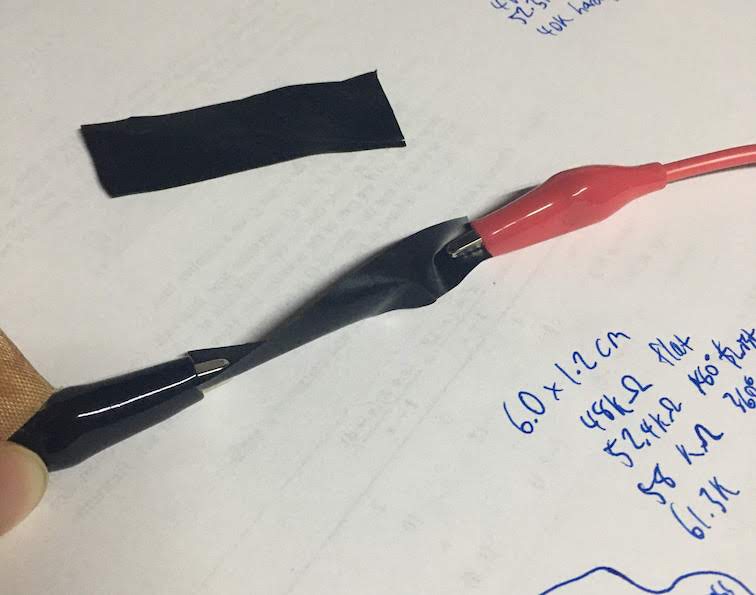 For these tests, I simply flipped one alligator clip and held the strip taut on the table. Best results came from twisting the strip so much that it curled into a tube, around 360 degrees for this width of strip. 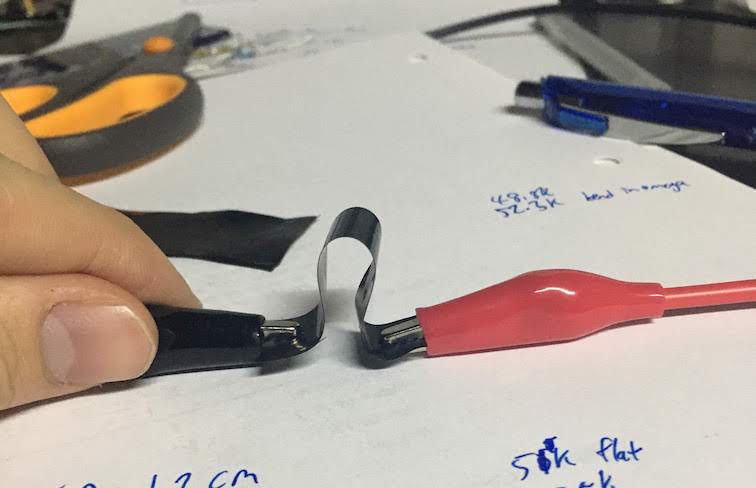 I bent the strip into a bit of an omega shape, which didn't change it much. When I pinched it, the overall distance of the strip changed so the resistance went down instead of up.

The resistance increased "linearly" from not pulling to maximum pull strength. This test was a bit tricky since my resistance would change the strips if I touched both alligator clips, so I carefully pulled both ends of the plastic without contacting the clips.

When it comes to pressure, Velostat is not that great of a sensor without modification. I found that surface area of the finger touch affects the resistance more than pressing on it, and that non-finger touching with a plastic scissor's handle did not affect it much at at all.

Since I wanted to use this as a pressure sensor, I tried folding the sheet in the middle then pressing on that. This worked much better, but required securing by tape or some other adhesive.

This site I visited claimed that heat did not affect the sheet's resistance, but I decided to test it out. I held a soldering iron near my test strip without touching it, and found the biggest changes yet! It took a few seconds to heat to the max resistance, and about a minute to cool back to baseline.

I wanted to connect some wire to this stuff, but some people online were using copper tape with conductive adhesive and conductive thread, which I didn't have. I tried soldering to it, but it just melted :(. Since alligator clips worked, I tried "crimping" some metal wire onto it, and that seemed to work well. Seems like it just needs to be in tight contact with metal to conduct. 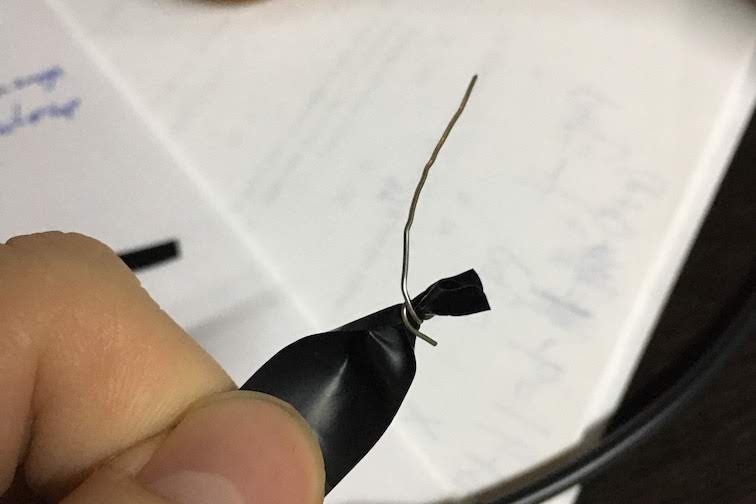 That's all! I'm probably going to stick with pressure sensing with my folded sheet, it seems to produce pretty drastic resistance changes.